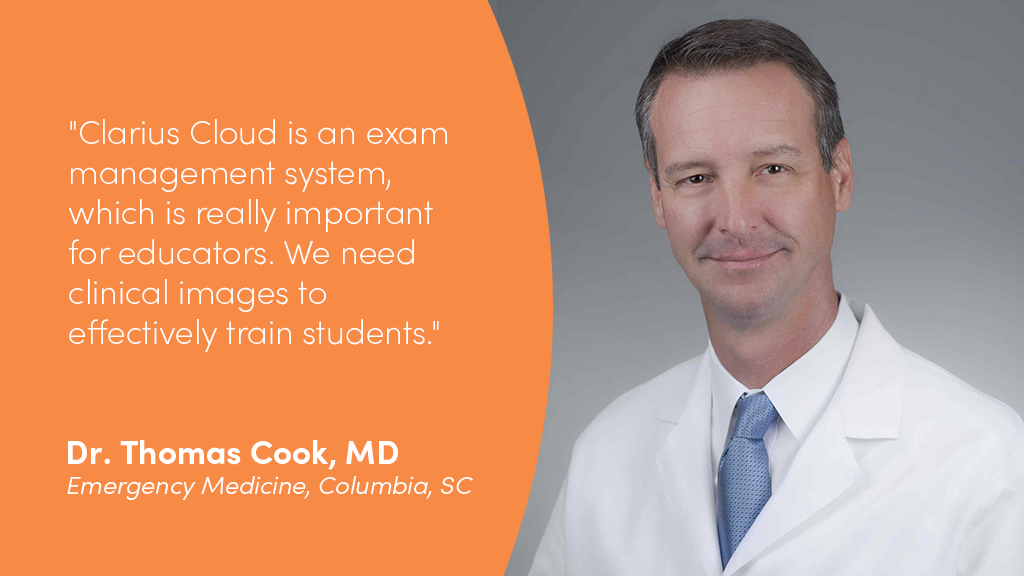 Dr. Tom Cook has been training clinicians to properly use ultrasound imaging since before the turn of the century. A passionate educator, he co-founded 3rd Rock Ultrasound, one of the most popular point-of-care ultrasound training institutes in the United States.

To teach his students, Dr. Cook uses Clarius HD ultrasound scanners to capture real-life cases from his work as an emergency physician at Prisma Health in South Carolina. He uses the clinical images and videos that he saves to the Clarius Cloud to create online training materials. Thank you, Dr. Cook, for sharing these four recent cases with us.

A 73-year-old female presents with hematuria after falling down. The patient had a CT-scan to look for any evidence of traumatic injuries; however, and due to her hematuria, her bladder was investigated using ultrasound.

After performing ultrasound in the transverse plane (video 01) followed by a sagittal view (video 02), there was clear evidence of bladder wall thickening, which presents on ultrasound imaging as hyperechoic lines. Following the ultrasound, I suspected that the patient might have bladder cancer, which was later confirmed. The hyperechoic lines turned out to be blood clots that were released during the traumatic event, leading to hematuria. After further evaluation by a urologist, the patient was treated and recovered from her condition.

Diagnosis? The patient had bladder cancer that led to the formation of blood clots in the wall of her bladder, which presented as hematuria after her traumatic injury.

A 71-year-old male presents with gradually worsening dyspnea (i.e., shortness of breath) to the emergency department.

To visualize the anatomical integrity and hemodynamics of the heart, I performed an echocardiogram by starting with the parasternal long-axis view (video 03). As you can see in the video, the patient has a significantly compromised left ventricular function with evidence of mitral regurgitation. Figure 02 illustrates the second axis that I followed (apical 4-chamber), which resulted in the ultrasound recording showed on video 03, confirming the defective left ventricular function and showing bilateral atrial enlargement and moderate mitral regurgitation.

The ultrasound recording also displayed evidence of tricuspid regurgitation, which suggests that the patient has right-sided heart failure, secondary to his left-sided ventricular dysfunction. After that, I used the probe to visualize the patient’s vena cava that demonstrated volume overloading (video 04). Finally, a quick look at the patient’s thoracic cavity showed moderately sized pleural effusion (video 05).

A 24-year-old female patient complains of a tender neck mass that developed 24 hours after a throat infection.

The physical examination showed impressive dimensions, which warranted the use of ultrasound to decipher the nature of this mass. The ultrasound imaging (video 06) demonstrated a vascular solid mass of 3.1 centimeters, which is considerable relative to the timeframe. Fortunately, this mass is associated with a recent history of throat infection, ruling out the diagnosis of cancer (e.g., Hodgkin and non-Hodgkin lymphomas).

Diagnosis? The patient had a microbial infection in her throat, which triggered non-suppurative lymphadenitis in the cervical lymph nodes, leading to the neck mass.

A 45-year-old male with ESRD who is on dialysis presents with neck pain. The patient has a dialysis catheter placed in his right subclavian vein. He also noted having swelling around the right cervical region.

The placement of catheters could lead to the formation of clots that block the main blood vessels, leading to pain. To confirm or rule out this diagnosis, I used ultrasound to generate video 07, which demonstrates the different structures of the neck. Once I placed the probe on the patient’s neck, the ultrasound showed clear evidence of a big blood clot in the internal jugular vein. To enhance the appearance of the thrombosis, I opted for a sagittal axis view shown in video 08, which clearly depicts the blood clot that could be deadly if it reached the lungs as it will lead to saddle pulmonary embolism.

Diagnosis? The patient had a sizeable blood clot in his internal jugular vein following dialysis catheterization.

How did Dr. Cook become an avid ultrasound user and educator?

A practicing emergency physician and ultrasound trainer, Dr. Tom Cook has been working in the field for 31 years. Since 2001, he has served as the Program Director for emergency medicine at Prisma Health, University of South Carolina.

Dr. Cook received a scholarship from the army, where he trained in at a post located in Killeen, Texas, known as Fort Hood. Once he finished training in 1993, he served in Honolulu, Hawaii and then moved to Columbia, South Carolina where he started a training program to teach ultrasound in collaboration with the University of South Carolina. Dr. Cook met Dr. Pat Hunt in 1998 and founded 3rd Rock Ultrasound where they released their first course.

Dr. Cook is committed to teaching medical students, residents, nurse practitioners, and physician assistants to become comfortable with using ultrasound because he believes it will improve patient care all across the world. He and his colleagues at 3rd Rock Ultrasound have reviewed more than 1,500 cases while traveling and teaching around the globe.

Visit 3rd Rock Ultrasound to view more video cases. To learn more about Clarius HD scanners visit our emergency medicine page or click the button below to speak to a product expert.