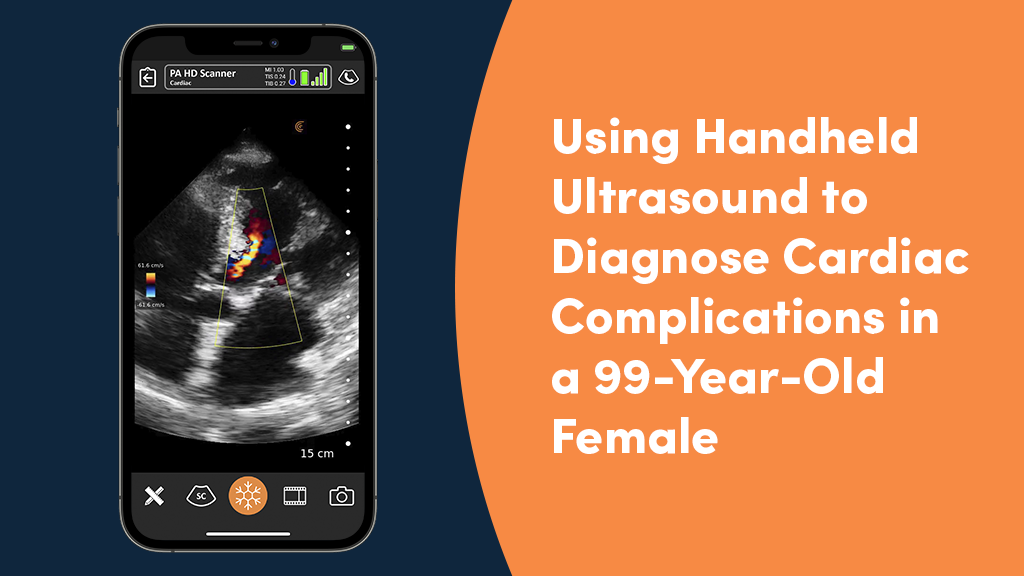 We recently asked Dr. Arishenkoff to share his experiences during an instructional webinar: POCUS for COVID and Beyond: Diagnosing Lung, Cardiac and Thromboembolic Diseases.

Read on to learn from Dr. Arishenkoff how a detailed cardiac ultrasound exam with the Clarius L7 HD helped him correctly diagnose and treat a patient who wasn’t responding to typical interventions.

Background on the 99-Year-Old Patient

“A 99-year-old female with infrequent healthcare was recently admitted to our hospital. She has CKD with a baseline creatinine of 180.

She was only taking ASA and reported one week of progressive generalized weakness, functional decline, mild confusion and decreased PO intake. She spent the last couple of days almost exclusively in bed. She’s in no distress and has no work of breathing that’s visible at rest.

The initial team that saw her suggested the cardiorespiratory exam revealed an irregular tachycardia and otherwise no significant findings. Her extremities were cool but there was no mottling. Her vitals were remarkable for atrial fibrillation with rates into the 160s. And despite that high heart rate, she had a blood pressure in the systolic 160 to 180 range, she was sat in on-room air and afebrile.

The patient’s creatinine was slightly up and one of the most significant findings that we saw was lactate of 4.8. There was a small increase in the anion gap. Here is her test X-ray.

This is a typical emergency department CXR. An AP film in a sitting position without a good inspiratory effort. There’s not much information we get from this x-ray. There does seem to be some bilateral blunting of the costophrenic angles and a bit of fluid in the fissure on the right.

The team initially felt the patient was in decompensated heart failure precipitated by uncontrolled tachycardia. She was given IV Lasix and Metoprolol. Her follow-up blood work a few hours later revealed an increase in both her creatinine and her lactate. This was followed by a reflexive change in the strategy going from Lasix to Crystalloid. And over the next 48 hours, the patient received PO Metoprolol, further Lasix and small fluid IV boluses with fluctuating, but persistently elevated lactate and climbing creatine.

When Typical Treatments Fail, Bring in the Ultrasound Expert

It was at this point that we were asked to drop by and scan her to see if we can identify some extra data that might be helpful.

We’re going to focus on the cardiac scan but a lung and IVC scan were also performed. The lung scan revealed bilateral moderate to large, simple pleural effusions in the dependent regions of the chest. She had a dominant A-line pattern with normal pleura. Her IVC showed a maximum diameter of about 1.7 centimeters with a collapsibility index of less than 30% and in the short axis, her IVC was ovoid rather than spherical in nature. This is in contrast to a spherical-looking IVC that is seen when the IVC pressure (ie. CVP) is significantly elevated.

Starting with the Parasternal Long Axis

I like to start with my parasternal long axis. In this image, I’m getting a rough sense of what the overall ejection fraction is and eyeballing it is a good place to start.

I suggest that we’ve probably got at least a mild, even up to a moderate reduction in her ejection fraction or systolic function in this view. I look at the change in the diameter of the left ventricle or fractional shortening of diameter. And I would suggest that the change is definitely less than 20%. I also look at the thickening of the myocardium and I don’t see that that myocardium is thickening up during systole as much as I would expect, suggesting maybe that the myocardium is not contracting normally.

The other thing that I look at is the overall chamber sizes. This includes the rule of thirds. In this case, the RVOT is similar in diameter to the aortic root. However, the diameter of the left atrium is much bigger than the aortic root and RVOT. This suggests that there’s a chronic increase in the LVEDP which suggests underlying LV diastolic dysfunction. One must also consider that mitral regurgitation or mitral stenosis is a cause for LA dilatation. Finally, I don’t see any pericardial effusions present.

In this clip, we put a bit of color over the aortic valve. During diastole, a small jet squeaks back through that aortic valve into the left ventricle which indicates aortic insufficiency. Based on the volume of the regurgitant jet it does not appear severe in nature, but this isn’t the best location to quantify that.

We can see a small blue jet directed posteriorly into the left atrium. Based on this image, the patient appears to have at least have mild mitral regurgitation. Once again this does not seem to be severe judging by the volume of the left atrium being filled by the jet.

Myocardium Seems to Be Thickened

Once again, we can see thickened LV myocardium with a hypertrophied papillary muscle. In addition, this view corroborates the fact that the ejection fraction appeared slightly down in the long axis view. Finally, I don’t see any bowing or flattening of the interventricular septum that would suggest pressure or volume overload of the RV.

The apical 4 chamber view provides a good look at all 4 chambers, the mitral and tricuspid valve. Unfortunately, in this image we are missing quite a bit of the right ventricular free wall because of shadowing, likely a bit of lung. In addition, the LV lateral wall hanging off the side of the screen.

In the ultrasound video above, we’ve put color over the tricuspid valve and we’ve got a blue jet that’s coming back all the way to the posterior wall of that right atrium. Itappears to be filling a large portion of that chamber; upwards of 40%. This would suggest that we’ve got at least moderate and even maybe severe tricuspid regurgitation.

Apical View of the Mitral Valve

In this image, we can see that we’ve got a blue jet coming back into the LA. It does not appear to be as severe as what we were seeing across the tricuspid valve, but based on the area of t the atrium filled, it is in the realm of moderate regurgitation.

We put the color over the LVOT in the apical five chamber. We can see a red jet originating at the aortic valve coming back through the LVOT during diastole. Based on the jet area of the LVOT, this appears to be at least moderate aortic insufficiency. It is important to add that valvular assessment is complicated and requires multiple views and hemodynamic correlates. Using the area of the regurgitant chamber occupied by the regurgitant jet is only an estimate.

While color is not routinely added on basic point of care cardiac exams, it may add valuable clinical information. It is an advanced skill, and the limits of a focussed point of care valvular exam cannot be overstated. However, when used with the appropriate degree of humility, color flow helps you look at the valves and appreciate important pathology that may inform real-time diagnostic and treatment decision-making. We wouldn’t have got this level of nuanced and detailed explanation for the cardiogenic component of her shock-like state, without the valvular studies. We often limit our heart failure scans to looking for pulmonary congestion and LV systolic dysfunction. Heart failure has many phenotypes and the ultrasound can provide us with those extra data points that lead to a more refined diagnosis and treatment strategy.

Incorporating Observations from Ultrasound Cardiac Images into Our Clinical Case

Let’s review. What struck me most about this patient was her elevated lactate, elevated creatine and a change in her mental status. Taken together this suggests a state of global hypoperfusion. And despite the fact that she was hypertensive, she was bordering on shock.

Her IVC wasn’t in keeping with significantly elevated right-sided pressures. It is important to consider the effects of moderate TR and the pleural effusions on her IVC, both of which can lead to an increase in RAP. As such, we would expect both of these features to lead to an exaggeration of her IVC size and lack of collapsibility. In this case, the patient’s IVC was less than 2cm and had visible collapse despite the TR and pleural effusions. In addition, she had no peripheral edema. Base on the clinical and ultrasound data we were not convinced that she demonstrated a degree of systemic congestion to explain her degree of end organ compromise.

I really felt that the cardiac scan was most revealing in this particular case. We were able to demonstrate that she likely had concentric LV hypertrophy. We felt that her history of atrial fibrillation was also central to this case. We need to consider the impact that rapid heart rate will have on LV filling time and cardiac output. Secondly, she had at least moderate aortic and mitral regurgitation, in the context of elevated blood pressure. An increase in afterload will increase the regurgitant fraction and further impair cardiac output. The increase in intrathoracic pressure related to the pleural effusions can have further effects on the diastolic filling of the LV. Finally, she also had a decreased LV systolic function which has the potential to further compromise her cardiac output.

The ultrasound findings were supportive of a cardiogenic cause of hypoperfusion. She clinically had no clear alternative etiology for this issue. The cardiac images really helped us identify aspects of her cardiac function that were impaired. We felt that in this case, the problem was forward failure or a decrease in her cardiac output secondary to compromised LV filling, increased left-sided regurgitant fraction on the background of decreased systolic function. This is in contrast to the more common heart failure presentation associate with backward failure and congestion. This differentiation is particularly important as the treatment is significantly different.

We suggested to the team that they needed to be a little bit more aggressive with their afterload reduction, add another antihypertensive to her regimen, and start to bring down her blood pressure and control her heart rate.

We needed to allow for better filling time to accommodate that stiff ventricle and so we suggested that they continue to aggressively work on getting that heart rate down with nodal blocking agents. We also suggested that they consider drainage of the pleural effusion. Reducing intrathoracic pressure may allow better filling of the left ventricle.

We also suggested that they avoid the Lasix-fluid infusion yo-yo. Congestion or backward failure was not felt to be a big part of this problem and so treating heart failure is not all about Lasix. In addition, we felt that she might actually have a requisite need for increased filling pressures on the basis of her stiff ventricle. Not to mention that she had a stable respiratory status, so a lack of compelling reason to push diuretics in the first place. She responded well to the new treatment plan.”

About Clarius Ultrasound for Cardiac Scanning and More

Wireless and app-based, Clarius delivers fast imaging and sharp detail at the point of care. Cover the scanner and your smartphone completely to reduce the risk of infection. Dr. Arishenkoff, MD, FRCPC used the Clarius PA HD to capture the ultrasound clips and images he used for his cardiac case study. The Clarius C3 HD multipurpose ultrasound scanner is also suitable for lung exams. Visit our Emergency Medicine specialty page to learn more about Clarius. Or contact us today to request an ultrasound demo.