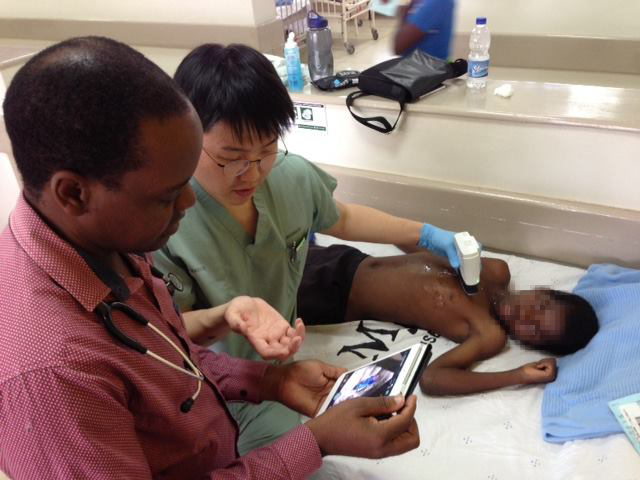 Clarius is proud to support global health initiatives around the world to bring ultrasound to the health practitioners that need it. Here’s an account of a recent medical mission to Malawi.

We spoke with sonographer Seung Ju (Marcello) Na, H.BSc, RDCS, who recently travelled on a medical mission to Malawi. Called the “Heart of Malawi,” the mission’s goal was to diagnose heart issues and train locals in using ultrasound.

Marcello realized Clarius would be well-suited for the mission after observing other consulting doctors from overseas, who were focused on point-of-care ultrasound. It’s when he thought, “You know what? Clarius will be the best thing to bring in for the screening of patients.”

It was important to have an ultrasound system that was easy to use. Clarius’ scanning presets help automate the scanning process, as doctors don’t need to fiddle around with settings adjustments unless they want to. “It’s important because in a public setting hospital, there are loads of patients just waiting for a diagnosis, and any kind of diagnosis—I’m so grateful to scan these patients right off the bat,” Marcello says.

Marcello notes that it’s not enough to have access to ultrasound systems—there needs to be training on how to use them. There are companies that donate equipment, but the systems tend to be older and poorer in quality.

“I think the main problem is yes, you can give them all this technology. But if there’s no training, these machines are going to just sit in the closet collecting dust.”

Some private hospitals run by mission organizations have more advanced ultrasound systems, but there is still the problem of a lack of ultrasound training. In addition, the high testing fees make the hospitals inaccessible to most of the population.

While Malawi’s College of Health Sciences provides radiography education, it doesn’t for sonography. Marcello explains, “When doctors are hired at a hospital or district hospitals or health centers, they’re given a probe and without any other formal training or continuation of education for how to do ultrasound or what to look for. They’re basically learning on the job.”

Clarius scanners’ portability and battery-operated nature also made them well-suited for the mission. Blackouts were common, so the ability to use Clarius scanners without depending on electricity was a literal lifesaver. And since the batteries can be recharged by solar chargers, a power outage wouldn’t keep doctors from continuing their scans.

Doctors liked the image quality, colour, and the ease of optimizing the gain. Having the Clarius ultrasound allowed Marcello to screen and triage patients more effectively, speeding up the healthcare process. He and other volunteers went around wards in local hospitals, scanning patients who had congenital abnormalities or potential chronic hypertension. Local healthcare experts began to consider developing a detailed diagnostic ultrasound program of their own.

“Their eyes lit up just by looking at the screen. They were able to make measurements and see the color flow. The patients were just looking at it like, ‘Oh my god. Is that my heart?’ It’s this mind-altering experience. It’s not just for them but for us too.”

Marcello is optimistic about the future of ultrasound programs in Malawi, noting Canada’s increasing role in providing foreign aid. Read the day by day account of the mission on the Heart of Malawi Facebook page, and view cardiac cases on Clarius Cases.