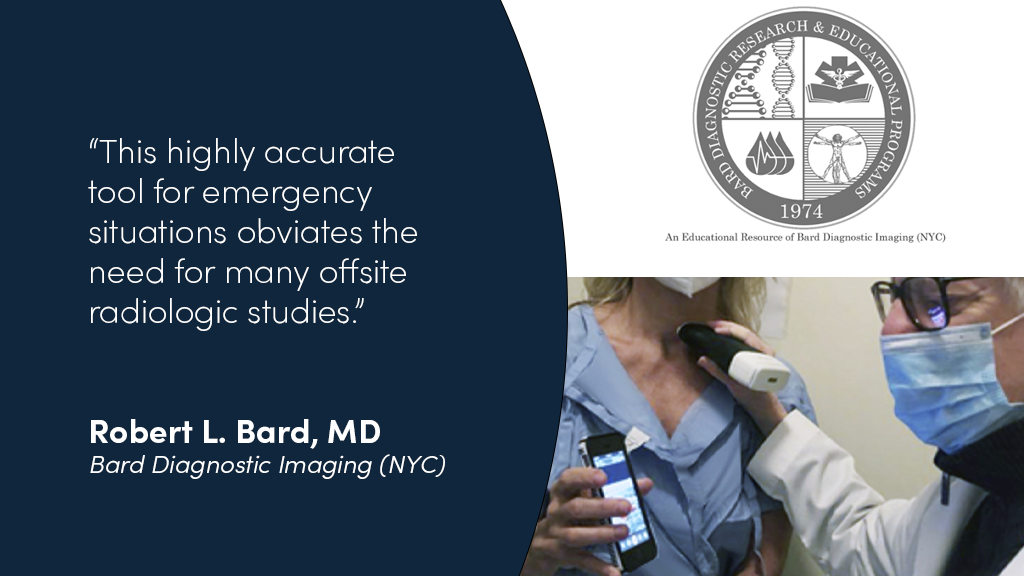 Since the advent of ultrasound scanning in the 1950’s, developers have continually explored and expanded its diagnostic applications. After all, the digital advantages of ultrasound brings a far safer and non-invasive alternative to radiation-based imaging to produce real-time images of the inside of the body.

Ultrasound innovation effectively identifies anomalies including the causes of pain, swelling and infection in the body’s internal organs while allowing the diagnostician the ability to zoom and ‘travel’ deep into the body for maximum exploration. Digital Imaging technology is also used to help guide biopsies and in many cases, even replicate much of the same reports of a clinical invasive biopsy.

To stay current with today’s medical needs, the PORTABLE HAND-HELD ULTRASOUND DEVICE – aka the “modern stethoscope” joined the market. Powered by calibrated sound frequencies, this non-invasive scanning solution safely diagnoses the physiological condition of most vital organs and tumors in real time.

The pocket-sized smart-phone integrated advancement clearly competes in resolution and performance with the over-sized hospital counterparts at a fraction of the cost! Moreover, the hand-held revolution responds to a much wider set of demands from emergency field calls to bedside checkups. This portable hand-held “diagnostic lab on-the-go” is truly the game-changer for patient care professionals.

The community of radiologists and medical investigators (of all disciplines) have spent a major part of their career confined in exam rooms of a medical office – navigating a number of probe options wired to a 130lb hospital grade appliance on wheels. From tumors to traumas, we relied on feature-rich computerized systems that provided remarkable patient data. But with all the advancements and advantages of ultrasound solutions (for both the patient and the practitioner), my team and I elected to support this technology evaluation with the hopes of seeing the future of clinical imaging.

My diagnostic imaging practice took on the challenge of using the Clarius L20 HD on a wide set of case types (sourced from local cancer centers + other private specialists). This gave us the best opportunity to beta test the product for real-world clinical applications large and small. What’s more, we wanted to see how the Clarius sized up to the “un-portable big boys” of hospital grade technology by implementing a comparative study of all test patient’s scan with our house equipment (whose brands shall be omitted from this review).

Recent design innovations responded to the high demand for the many out-of-hospital scenarios (like emergency calls, triage areas and commercial travel). Companies like Clarius now offers the market this handheld wireless probe integrated to a Smart Phone App, revolutionizing point-of-care into a whole new level of patient interactivity and scanning advantages!

Blending into the smart phone era was an innovative move by integrating scanning technology within a PHONE APP. This Clarius prototype brings a level of streamlined familiarity to any learning curve as it carried a full arsenal of vital scanning functions that I often use in my patient work. Where hardware once occupied physical space, hand held devices like the Clarius uses cloud technology to house unlimited functionality.

I see the potential to eventually take ALL the features of my entire conventional (hospital sized) appliance in this portable platform. In addition, this L20 offered other surprising elements like Color and Pulse-Wave Doppler, DICOM, unlimited cloud storage and Telemedicine – functions that add to the limitlessness of real-time response and patient care.

My radiology team in NYC received the Clarius L20 HD around mid-September with great anticipation after a virtual demo months prior. We were thrilled to connect with CEO Laurent Pellisier who shared the upcoming upgrades to portable scanning and then offered me this prototype model as part of their beta testing program. It was here that I truly learned about the company’s design strategy for the next generation in medical diagnostics.

L20 has unique and intuitive features like the presets for vital organ scanning, the 8-20 MHz high frequency range with a 4cm max depth, remarkable data gathering image quality and a user-friendly interface. These elements clearly reflected the company’s commitment to R&D. But all these upgrades became that much more enjoyable alongside it being a COMPLETELY WIRELESS probe—a blessing of complete freedom for any imaging professional!

Fig 1a: This lady first came in with a diagnosis of a swollen ear after her biopsy a month before showed benign actinic keratosis. Her ear was terribly swollen, and when we saw it, it was also inflamed. Now the problem with biopsies is they can get part of the disease, but since the actual worst disease can be at a different area – a biopsy may miss obviously the most aggressive disease. In this case, it missed a high grade squamous cell cancer because she had mohs surgery done a month after.

Fig 1b: These scans using the Clarius clearly shows the inflammation and you see that you have a 4.5mm deep Squamous Cell tumor. The image on the right shows the arrow pointing to the eroded cartilage, the black area above the cartilage is of course the skin cancer and the bright white line of the cartilage (eroded) is denoted by the arrow, indicating the penetration of the cancer through the cartilage.

Fig 2: This fellow came in with a lump in the groin. The 18MHz shows a fatty tumor beneath the skin as the Clarius shows an advanced version of the skin, which is gray. And the lipoma beneath that is much darker, so it’s fatty tissue. So you can see the lipoma tissue on the regular sonogram and the lipoma match and echo pattern. The Clarius shows a dark band right under the initial epidermal echo, which shows the 200 micron epidermal thickness. So we can see the lipoma was not affecting the skin. The echo pattern is essentially the same with both ultrasound devices (where the Clarius L20 imaging capacity well competes with the large format hospital grade ultrasound device without limitations in scanning the fatty tumor at a comparable frequency of 14.0).

This image is the same fellow (as in Fig. 2) – he also had a catscan which showed an abnormality in the left groin. The study on the left shows a green box, which shows an abnormal lymph node. Generally a lymph node is gray on the outside and bright white in the center. Here the lymph node is just the opposite where you see the red artery inside the lymph node core. This area is usually the whitest or brightest area. You can see on the Clarius output, which actually mimics the same finding and shows the dark center, which is abnormal and the centric nature of the metastatic lymph node. He had prostate cancer. So it metastasized to different areas. For this complex scan, the handheld portable L20 (again) rivals the effectiveness and diagnostic output expected from the large format quantitative sonograms.

Fig. 4: This is a lady who Kennedy with a trigger finger. The left image is scanned by our conventional hospital-grade ultrasound. The white is the tendon in the finger, it’s called the FLEXOR POLLICIS LONGUS – the yellow arrow point to the black area, which is the synovial thickening with scar formation that’s trapping the tendon. The comparable picture on the right shows the 1.2 mm flexor tendon of the Flexor Pollicis Longus and the arrows point to that same synovial thickening. In comparison between the two formats, we found the output images of this depth and subject to be completely comparable.

This scan can be done in a larger study – you can see the Clarius device (Fig. 5a) and the L20 preset for small organs. The Thyroid is labelled (yellow) as the dark cyst. (Fig. 5b) The 18 MHz probe of our large unit also shows the thyroid simple cyst and this is compared with a study with a 70 MHz probe of the Clarius showing the cyst, but with some tiny white echoes of early calcification. The color represents blood flow from the Doppler setting – which we use just to make sure it’s a cyst. For the purposes of this test, we did not turn on the DOPPLER setting on the Clarius, but it is equipped with this feature also.

The versatility of the Clarius L20 high frequency probe allow diagnostics of the eye, vascular structures such as the carotid intima and superficial temporal artery, digital tendon pulleys for trigger finger and avulsion fracture of the fingers and toes often missed by routine orthogonal x rays on rounded structures, skin tumors and soft tissue inflammatory disorders.

This addition to the family of probes provides “an ultrasound office in a lab coat” offering the convenience of fingertip access in most clinical situations. This highly accurate tool for emergency situations obviates the need for many offsite radiologic studies. Further development in the area of stroke evaluation and echo cardiography surely arriving from the R&D department.