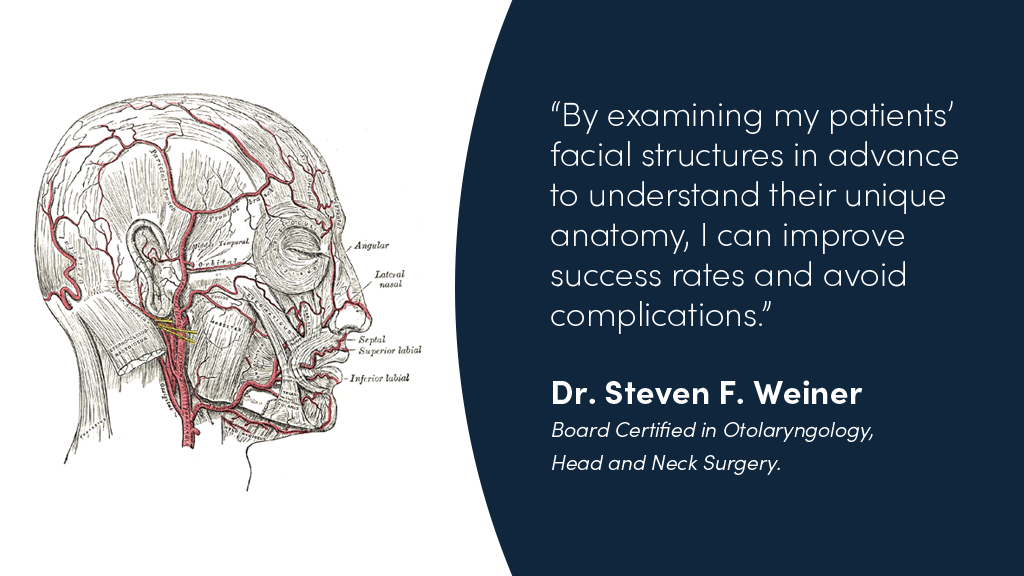 According to the American Academy of Dermatology, as the popularity of non-surgical fillers has grown, so has the incidence of corresponding complications. While some complications such as scarring and swelling are minimal, more severe cases of vascular occlusion or even blindness have been reported.

In a recent webinar, Dr. Steven Weiner, a board-certified head, neck and facial plastic surgeon, showed us how he uses ultrasound to minimize the risks and complications associated with dermal filler procedures. Watch the full webinar now or read on to learn how Dr. Weiner uses the Clarius L20 ultrasound scanner for vascular mapping.

In this post, Dr. Weiner (1) explains ultrasound terminology, (2) reviews the use of B-Mode, Power Doppler, and Color Doppler, and (3) shares a 7-minute tutorial video on how to perform facial vascular mapping.

“I want to start by congratulating Clarius for creating what I deem is the perfect ultrasound device for the aesthetic physician. It’s high frequency, which is important for looking at the incredibly shallow anatomy we are looking at. In some of the images I’ll show you, the vessels are millimeters thick and we can see them clearly. Clarius is also very easy to use and intuitive, particularly with the Apple iPad. There are no knobs or track ball like with a traditional system. It’s handheld and I can throw it in my bag and take it with me wherever I go.

Before I get into talking about vascular mapping and fillers, let’s go over a little terminology about ultrasound.

Echogenicity – Echo is what the sound waves do when they go from the ultrasound scanner, bounce off an object in the skin or subcutaneous structures, and come back. On this ultrasound image, you’ll see examples of the four characteristics of echogenicity.

Anechoic Area – You get a black or anechoic area where the sound waves aren’t reflected back as you see this in an area shown on the image above. You’ll see this when looking at an area with HA filler, you see it in liquid or fluid filled areas, and you also see it when scanning the bladder, for example.

Hypoechoic – Areas that are not black or grey are hypoechoic. Muscles such as the masseter are hypoechoic because there’s a lot of blood flow in the muscle, but it’s not just liquid.

Isoechoic – An area that is the same shade of gray as the surrounding soft tissue is isoechoic. That’s found in the parotid gland.

Let’s explore how the different modes can be used for vascular mapping.

B-Modus is 2-dimensional gray scale ultrasound imaging. In the above image, we’re looking at a B-Mode scan of the superior labial artery.

Above is an example of a Power Doppler. Power Doppler is sensitive to vascular flow, but you don’t see the red and blue states as you would with Color Doppler, which gives you a sense of velocity of flow.

Below are examples of Farb-Doppler imaging. It’s useful to remember the mnemonic BART: blue away, red towards. If a vessel is blue, it’s going away from a transducer, and if it’s red, it’s going towards a transducer.

Sometimes it’s very easy to tell if it’s a vein or an artery, and sometimes it’s not. To be sure it’s a vein, you can apply pressure, and if it compresses very easily, you know it’s a vein. Also, the pulsations of a vein are more prolonged and the velocity is slower, which you can tell by the velocity scale shown on screen.

I use ultrasound for facial mapping prior to procedures. By examining my patients’ facial structures in advance to understand their unique anatomy, I can improve success rates and avoid complications.”

Watch the following video tutorial by Dr. Weiner to learn how to identify and characterize various facial vascular and anatomical structures, for safer filler injections.

You can replay the full on-demand webinar on Ultraschall in der Gesichtsästhetik: Vaskuläres Kartographieren, Beurteilen von Fillern und Komplikationen to learn more from Dr. Weiner about how wireless ultrasound can help your medical aesthetic practice.

Dr. Weiner practices at the Aesthetic Clinique in Florida, which he established 15 years ago. He also offers private ultrasound instruction and serves on the faculty of the Academy of Injection Anatomy, which has upcoming group programs. Contact Dr. Weiner for more information.

To learn more about adding Clarius to your aesthetics practice for a fraction of the cost of a traditional ultrasound system, kontaktieren Sie uns today or request an ultrasound demo to see the difference ultra-high-definition imaging can make.